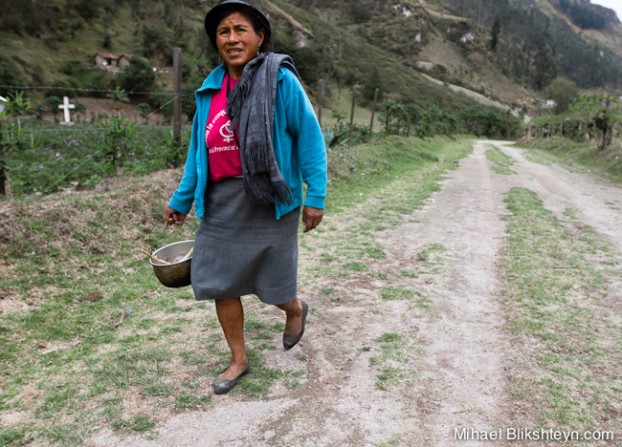 On a recent trip to Ecuador, I spent time exploring communities of the Andes Mountains. Ecuador is a small country in South America, but it is also one of the most biologically diverse regions in the world. In less than a day, you can travel from the lush tropical jungles to the Andes Mountains or the Pacific Ocean coast.

Prominent inhabitants of the Ecuadorian Andean communities are the indigenous peoples collectively called Quechua (Kichwas in Ecuador). They are several indigenous ethnic groups living mostly in Peru, Ecuador and Bolivia who speak a Quechua language.

A funny anecdote about the woman below. Nora and I were on our second or third day of the Quilotoa Loop hike. We stopped at the edge of the Rio Toachi Canyon, evaluating how long it would take us to descend the canyon and ascend to a town on the other side.  A lone woman was working her small field along the trail. When she saw us with our heavy, bulky backpacks, she waived us to come closer. The woman was holding a hatchet in her right hand. As we approached, she stopped working, dropped the hatchet and reached out for Nora’s arm to draw her closer. She put her arm around Nora and asked me to take a picture of both of them. She looked happy when I showed her the photos on the back screen of my camera and allowed me to take a few more photos of just her.

From Wikipedia: “Many indigenous women wear the colorful traditional costume, complete with bowler style hat. The hat has been worn by Quechua and Aymara women since the 1920s, when it was brought to the country by British railway workers and are still commonly worn today… The traditional dress worn by Quechua women today is a mixture of styles from Pre-Spanish days and Spanish Colonial peasant dress. Younger Quechua men generally wear Western-style clothing… Older men still wear dark wool knee-length handwoven bayeta pants. A woven belt, called a chumpi, is also worn which provides protection to the lower back when working in the fields”.

This year I covered the Swiftsure International Yacht Race out of Victoria, British Columbia. My first time covering an international yacht race!

Driftwood, scarred from fire. Beached. A wandering soul, tucked in the sand. Nearby. Fiery hair gently clinging to the grain of the […]