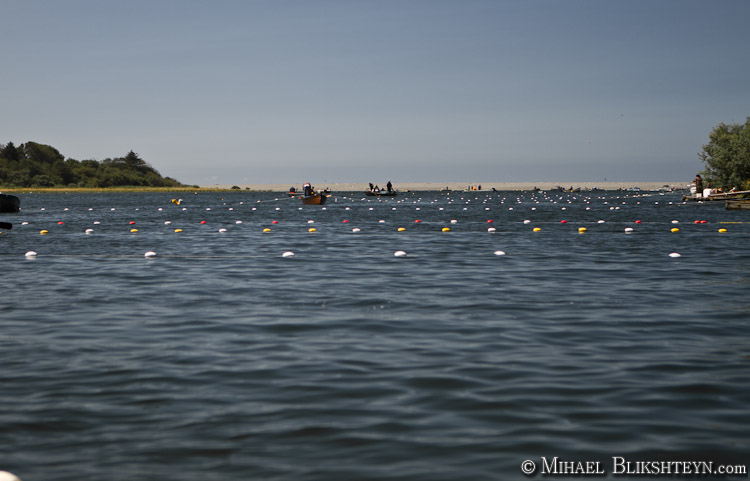 Towards the end of the king salmon season in northern California, which this year was from June through early September, natives of the Yurok Tribe were allowed to commercially gillnet 13,000 [corrected 16 October] king salmon from the mouth of the Klamath River. With no bag limit and the price of kings over $4 a pound, close to 200 gillnets were set along the last two miles of the river on August 22nd, the season opener for this fishery.

Thanks to Bob and his assistant, who were working for the tribe counting the fishermen and their catch, I was able to spend several hours zipping up and down the river, taking photos. The whole commotion looked like one big party, with many families picnicking on the river bank, or just dropping by to observe.

I was surprised to see how many women, and especially young women and girls fished. Probably quarter of all fishermen (yes, yes) were women. And they didn’t just come along for a ride. Some boats were exclusively female-powered, while on others, older men drove the skiffs and drank beer, while young women shook the nets clean of algae and landed the fish.

It took a couple of weeks to land the allocated quota and close the fishery. Observing the fishery on the first day made me ponder. With most Yurok fishing in aluminum boats with modern outboards and monofilament gillnets, how close was this festivity to the original subsistence-based way of harvesting the king salmon. Perhaps, it is a silly comparison.

Too see all photos in this series, click here.

Continued from Olympic Peninsula – an aerial view. Part I. We were stranded on an abandoned airstrip 20 miles from the nearest town. Even […]

During my move to northern California a few months back, I stopped by the Oregon Coast Aquarium in Newport, Oregon. It is […]