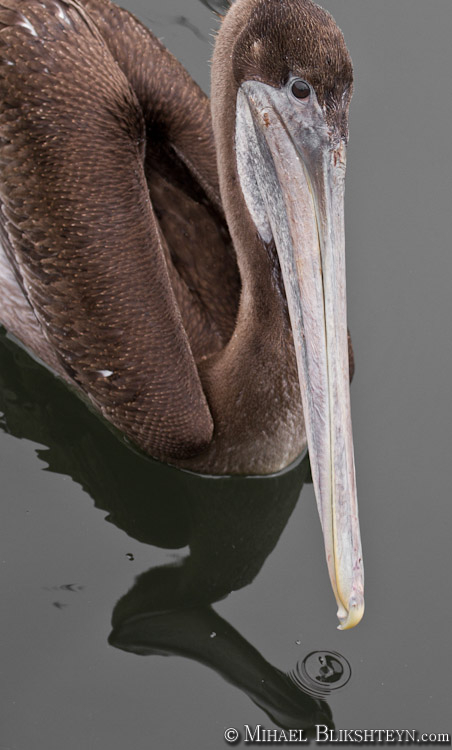 It’s hard to miss these peculiar brown birds gliding, in small groups, above braking waves of the ocean edge, disappearing into the fog. The Brown Pelican is the smallest of the 8 species of Pelecanus. It’s mesmerizing to watch them glide 30 feet above the surface looking for aggregations of small fish, bomb-diving for them, once spotted, head straight down, wings half-stretched, often disappearing completely under the surface.

I’ve noticed that a feeding pelican is often accompanied by a single sea gull that follows the pelican around, landing a foot away when the pelican emerges with its mouth full of fish, the gull hoping for the spills. Just like the best place to see the Bald Eagles in Alaska is around municipal dumps, a good place to watch pelicans in coastal California is around newly-returned charter boats filleting fish and throwing guts overboard.

One of the most anticipated events in Juneau, Alaska is the annual Wearable Art Extravaganza. A fashion show of extravagant dresses and […]

And so I found myself in Arcata, on the California North Coast, smack in the midst of Coastal Redwood forests, delicious produce […]

I took these photos of my grandma (“babushka” in Russian, emphasis on the first syllable) 3 years ago. She is turning 93 […]

Narrative and photography by Mihael Blikshteyn. Commissioned by The Salmon Project for the Salmon Love, Salmon Life stories in 2015. Reprinted with […]