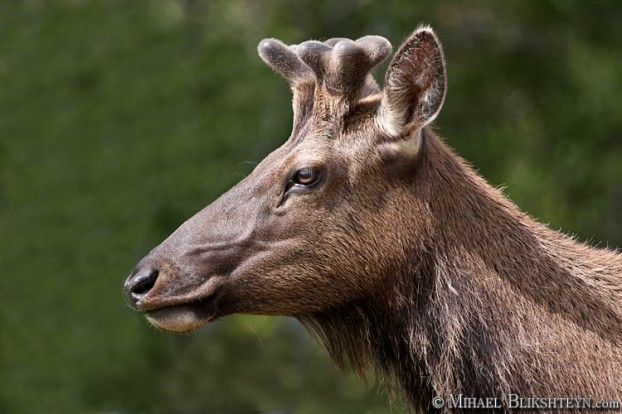 One of the largest mammals of North America are a mere half-hour drive from Arcata, northern California. Roosevelt Elk (Cervus canadensis roosevelti), the largest sub-species of elk, can often be spotted between Humboldt Lagoons and Prairie Creek Redwoods State Parks. In fact, after the Redwoods, they are the easiest to spot drive-by attraction here, spending most of their time grazing in open pastures or resting on creek banks.

In early spring, the cows are busy giving birth and tending to their calves, which are spotted, as is common among deer species. The bulls, which stay in groups separate from cows and calves, begin to regrow antlers that they shed the winter before. Towards late summer, the bulls will have grown their full sets of antlers for the rut, the mating season,  when males challenge each other for females, and to protect their newly-founded harems. Males, females, and calves will also grow thicker winter coats and neck manes for the winter.

So for now, I am just getting the stock shots of the elk and looking for the more interesting mother-calf interactions. It will be a wait of 4 months or so until large male bulls, with full antlers and manes, will begin challenging their opponents. I have found one spot where cows give birth and hide the new-borns. I am still figuring out how close I can safely approach them on foot without harassing them (i.e., having them charge me). I carry my red can of slightly-used (Alaska!) bear spray with me, just in case, hanging on the waist belt next to the lenses. With bears it was easy – what Alaskan hasn’t petted or held or posed for pictures with a black bear cub, while his mom was busy eating salmon berries or fishing for salmon in a nearby creek. But, if I got too close to a calf, would his mom try to trample me with her head up and eyes open, thus being susceptible to the spray? Or, would a 900-pound bull, with tiny velveted antlers try to charge me with head down and eyes closed, thus preventing any capsaicin (“and related capsaicinoids) reaching his lungs and eyes in time? Do they bluff-charge? Can I use a stick as a rapier (and will I remember anything from my childhood’s two years of fencing)?

And to make things more interesting, according to Wikipedia, In California, the container holding the defense spray must be less than 2.5 oz. Mine is 8.1, minus what I accidentally sprayed myself with, while quietly crawling close to brown bears fishing for sockeye salmon on Prince of Wales Island in Southeast Alaska last summer. But that’s another story.

Just like in Alaska, the US Pacific Northwest and northern California, Pacific salmon are the keystone species to the Russian Far East. […]

I can’t think of a more beautiful backdrop to an outdoors photo shoot than snow-covered Mendenhall Wetlands in Juneau, Alaska.  With golden […]