The address of the bus company in New York City Chinatown that was to take us to Washington, D.C. turned out to be a small cafe. The guy inside was very cheerful but didn’t speak any English and had no clue what we were looking for. We came to Chinatown by 10 pm on Monday, January 19, about an hour before the bus was scheduled to leave. A month earlier, Suzy and I got our tickets on-line for a bus trip from NYC to D.C. One of many ad-hoc companies operating buses between the chinatowns of several large cities on the East Coast for about $20 each way, the “New Century Travel” bus company was turning out to be trickier to find than we expected, or had the time for.

Luckily, several people outside the cafe directed us around the corner and we soon found two women standing outside, apparently in charge of the commotion. They directed us to a spot on the sidewalk and told us to wait. The bus arrived within 10 minutes and left at 10:30, half an hour ahead of schedule. Usually these buses are full of college students, as they are cheap, fast, reliable and a great way to travel between Boston, Baltimore, Philadelphia, Washington and NYC. This time, the crowd was different, going to D.C. with one purpose – to witness the inauguration.

We rolled into the D.C. Chinatown at 3 am on January 20th. People were wandering the brightly lit streets, police cars cruising everywhere, their lights throwing patriotic reds and blues on the surrounding buildings. Many cafes and diners were open, filled with people eating, drinking, talking and singing. It felt like an impromptu national holiday, a surreal late-night party in the wee morning hours, when alcohol is gone and everyone is half-asleep. 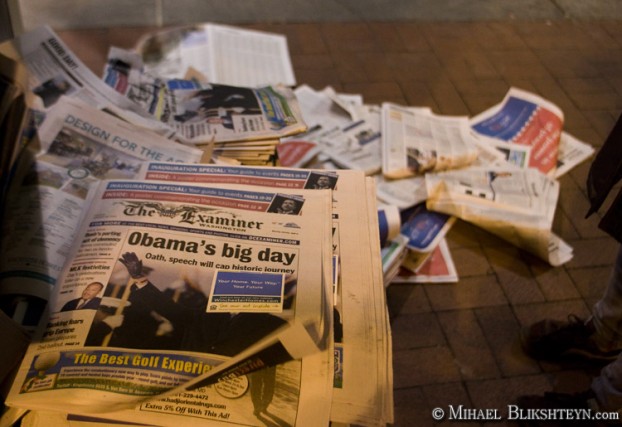 We decided to take the Metro to the Mall, a large rectangular open area between the U.S. Capitol and the Washington Monument, where most of the people were gathering for the ceremonies. As the Metro didn’t start running for another hour and it was a bit chilly outside, we dove into one of the basement eateries to keep warm. Tea, soup and chicken wings turned out to be the perfect snack for the occasion.

The Metro brought us within half a mile from the Mall. Streams of people were flowing in one direction, combining with streams from side streets into larger flows. Sirens and police lights everywhere blinded and stunned chilled and sleepy walkers. We silently entered the flow and drifted with the crowd. By 6 am we were as close as we could get to the Capitol, yet it was still 5 hours until the inauguration. Not wanting to freeze completely, we walked to the earliest-opening museum, one of the many lining the Mall, and half an hour after it opened were happily napping inside. It would’ve made for a perfect rest stop, if not for the crowd insisting on seeing the exhibits and periodically waking us up with their excitement.

By about 10:30 am, about half an hour before the official part of the ceremony was to begin, we were rested enough to venture outside. By then most of the Mall was full and we couldn’t get nearly as close to the Capitol as we did at 6 in the morning. We found a place on the outskirts of the crowd, by one of the huge-screen TVs. As we came to D.C. to see the people, rather than the official ceremony, I wasn’t paying as much attention to what was going on on the screen as the reaction of the people – booing whenever W. or Cheney would appear on the screen, clapping whenever one of the Clintons would be seen, and the cheer, joy and dancing when the Obamas themselves appeared.

By 1 pm, the official ceremony on the steps of the Capitol was over and the crowd started dissipating. As far as we could tell, the whole perimeter of the Mall was barricaded and closed off and no one seemed to knew exactly how to get out. We would follow the crowd in one direction, to find no escape at the end and turn back, only to come to another fence. What would have been a half-hour walk from the Mall to the Chinatown turned into a 5-hour journey. But it was worth it. To be in a crowd of this magnitude and leanings, it was an inspiring experience.

Here are Suzy’s photos from the trip (link).

It’s less than a month until first multi-level cruise ships cast their shadow over downtown Juneau, overpowering with their massiveness most of […]

Last summer I visited my folks back in New York City. My sister just had a baby, so I setup a quick […]