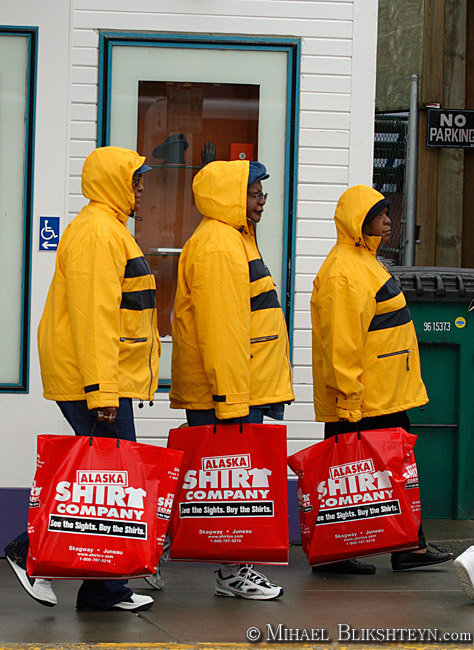 It’s less than a month until first multi-level cruise ships cast their shadow over downtown Juneau, overpowering with their massiveness most of the waterfront. Their guts will start spewing thousands of tourists onto South Franklin Street, letting them be on dry land just long enough to keep them motivated to spend money in Chinese-made trinket shops along South Franklin or on pre-packaged excursions of a few hours in duration – just long enough to justify the horrendous prices but not long enough to let them appreciate what Juneau is really about.

Just like many other Juneaunites, when I lived in the Valley or out the road, I used to go to downtown once a week or less in the summers. It gets noisy and crowded, tourists walking on roads, as if in Disneyland, cruise ships spewing smoke into the air, which gets trapped between the Juneau and Douglas mountains over the channel. Luckily, I now live just far enough from the waterfront in downtown to be shielded by a 15-minute walk from the passenger docks – just far enough for most tourists not to reach my little neighborhood, tucked away along the channelized Gold Creek.

Let me ramble for another second on the way I differentiate between tourists and travellers.  I greatly enjoy meeting and interacting with travellers – people who plan trips on their own and come on public or mass transportation – be it trains, busses, or, in our case, planes or ferries. They usually don’t rush in, trying to cover a lot of ground over a span of a few days or a week. They take time to learn about places and people. They often come with backpacks and travel guides. They are also often seasoned travellers, who have swallowed the travel bug that now drives them to see and learn still more. Now, tourists, by my definition, are the people who come on pre-packaged tours, often for a week or 10 days. Like animals herds of the Serengeti Plain, they travel in large groups, but instead of migrating by instinct, they are led by travel guides or little brochures to points they must see and trinket shops (often owned by the same cruise ship companies) they must buy from. They, for the most part, end up with shallow, truncated views of places they visit – if being allowed to stay in one place for 6 or 8 hours can really be considered “seeing” it.

When I was in high school, my parents took me on a couple of such “guided” mass trips, and since then I began to despise such travelling. I hope I will feel this way in another twenty years.

However, since moving to downtown and starting to observe tourists incidentally, I became amazed by the plethora of photographic material offered by them. They are brought by floating giants from all over the world and are concentrated on a several-block strip of South Franklin Street. Going there is like going to an human zoo – the tourists offer a gamut of clothing styles, colors, patterns and behaviors. And the gift shops conveniently provide plenty of props to work with – a moving and talking electronic life-size miner with a yellow hard hat sitting on a wooden box, a life-sized plush black bear, an oversized black and white eagle, and a wooden chair in the shape of a bear. And when I walk along South Franklin with a camera with a long telephoto lens, I blend right in – no one even suspects I am there to shoot tourists, not whatever they’re shooting, which I haven’t quite figured out yet. I started working on this captivating project last year and will continue exploring the subject in the coming months.

With the halibut and black cod (sablefish) season just opening in Alaska, I decided to post a few photos from my photo […]