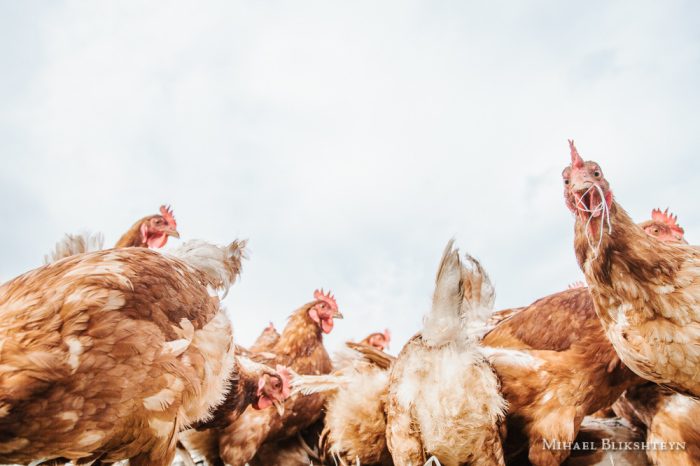 Chickens. There are more of them than any other species of birds.  Many, many billions of chickens are reared every year. We eat them, we eat their eggs. We keep them in our backyards, but mostly get them packaged in clear plastic bags from a local supermarket.

We have a vague idea of how they are bred and housed before we get them. A story shows up in the news here and there, but most of us still get them based on price from the cheapest supermarket.

I am looking at one billion written out. It’s a lot of zeros, more than I can really comprehend. 1,000,000,000. Every one of them is an egg and then a bird at some point. Something like 50 billion chickens are produced every year.

There are pockets in the US that are doing a better job breeding and raising chickens. More progressive places like the San Francisco Bay area; coastal northern California; Portland and Eugene, Oregon; Seattle, Washington and certain areas around it. I wanted to get a glimpse at the small-scale, organic poultry farming that serves local markets. On my most recent trip along the US west coast, I got a chance to photograph two farms – one outside of Portland, Oregon and another in Fort Bragg, California.

Several months ago I met the priest of St. Nicholas Russian Orthodox Church. The Church and Rectory in Juneau, Alaska are “among […]

It has been a while since I have updated my photo blog. This summer has been a bit crazy for me and […]