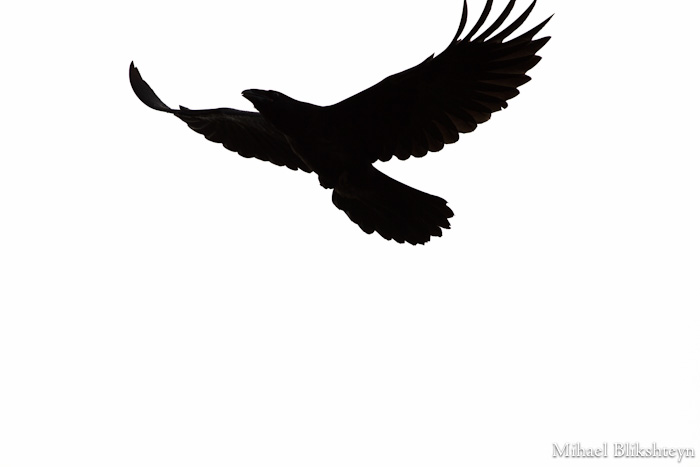 Working through unedited photos from last summer, I came across several pictures of juvenile ravens from Kamchatka. Looking at them, I was reminiscing about that trip and the circumstances of encountering the birds. A friend and I were exploring an abandoned 5-story dormitory building outside of town we were in, when we spotted a raven’s nest perched high on top of the building. The juvenile raven, although able to fly, had not yet left the nest completely. His parents weren’t around and he was flying in circles around the nest. Distracted by our visit, he became curious.  Staring at my friend, he flew right into the building – not a glass window, mind you, but the wall of the building. He tried to regain his flight mid-air, but after loosing momentum, not very gracefully crashed to the ground. Luckily, he was flying slowly, and didn’t seem to have broken anything or hurt himself, but was still visibly shaken. Once on the ground, he scrambled on top of a rusted car to regain composure. I was able to take a few photos of him from a far, as he was sitting still, dazzled. Usually, corvids are very aware of having a camera pointed at them, and photographing them can be a challenge. After several minutes his parents showed up, made a raucous, and he took off for the nest.

On another day, on the other side of town, we came across a nest with three young crows. Our goal was to observe coastal salmon fishermen, fishing trap nets set a couple of kilometers from shore. We found an abandoned military tower used for observations of approaching Japanese and American submarines. The tower was perched on top of a hill with a good overview of the coast below. As we were scrambling along the rusted stairways, we came across a nest on one of the tower platforms. The three youngsters hadn’t fledged yet and were bound to the nest. Their parents, again, weren’t around, and we literally had to step over the chicks walking around the platform to get to the top of the tower. They hugged one side of the platform as we were passing, and we crawled along the other. They didn’t seem too concerned about our presence and I took a few photos on my way down from the top.

For every kid in Russia, September 1st is the official first day of school. Every year, every school. First graders, going to […]

Just before I left Juneau, Alaska in November of 2009, I was asked to take a few photos of the Gold Town […]

The address of the bus company in New York City Chinatown that was to take us to Washington, D.C. turned out to […]

Channel Islands is a cluster of 14 small islands stretching from Auke Bay to Amalga Harbor near Juneau, Alaska. These islands provide […]