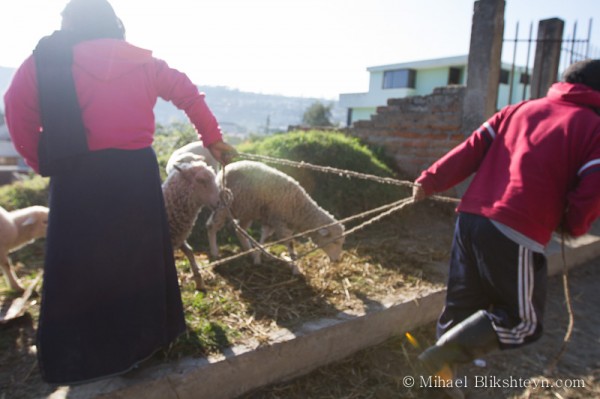 “Like every other tourist in Ecuador, we went to Otavalo. Otavalo, two hours north of Quito, nestles in a densely populated, fertile farming region of lakes and volcanoes whose slopes are parcelled up into patchworks of green fields. The town itself is famous for its market. Traders come from all over South America, peddling every conceivable tourist handicraft…”´

“Saturday was market day in Otavalo. In fact, there were three markets in Otavalo. While the tourists  bought their alpaca rugs and ponchos in the plaza, the locals crowded into the market at the other end of town to buy food, jeans and Metallica T-shirts.”´

“And then there was the animal market. Out in a grassy clearing on the edge of town, sharp-eyed farmers and their solid, no-nonsense wives inspected an assortment of cows, pigs, horses and donkeys. One by one, the animals were sold and led away quietly.”´

“Only the pigs seemed upset. Their new owners – and their wives and children – dragged the reluctant swine through the dust by ropes tied around their necks; a tug of war with the pig bucking and digging in its trotters and honking and squealing. It took a half-dozen people to heave a large animal onto the back fo a truck – lifting it by the tail and ears – from where it continued to honk in distress.”´

The Otavalo Animal Market is to be experienced through all three senses. It’s a cacophony of sounds, human and domesticated. It’s the smells of animals and their fear. It’s a sight of hundreds of peoples selling and buying, bargaining and appraising. Or just gawking.

It starts at dawn, sprawling across both sides of the Panamericana, the busiest highway, the central link connecting South American countries. Traffic comes to a halt as people dash across the highway with animals in tow. Large busses stuffed with children, chickens, mothers, guinea pigs, piglets and other wiggling creatures honk their way through crowds.

It was an interesting experiment trying to photograph the people at the market. Most older women would either yell or wave me off. They were categorically against any picture-taking. Men and younger people didn’t mind it so much, but it was the women who were doing most of the selling. I had to resort to shooting from waist, with my camera hanging on my neck strap, while looking innocently the other way.

´The Gringo Trail: a darkly comic round trip through South America. Mark Mann.

Point Reyes, an hour drive north from San Francisco, is a gem of a place. A prominent cape in the Marin County […]

Ah, life on the high seas. A small trawler making its way through the open waters of the Gulf of Alaska.

I’ve never been on a golf course, so I jumped at a chance to do a photo shoot of a friend playing […]