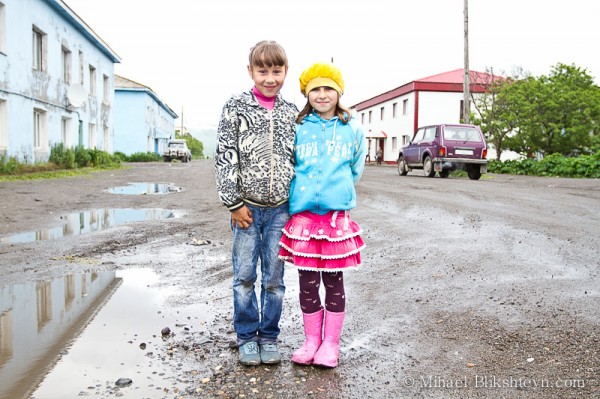 On the coast of the Sea of Okhotsk, on the southern bank of Ozernaya River, at the tip of the Kamchatka Peninsula lies the southernmost settlement of Kamchatka, the town of Ozernovsky. A town of 2,500 people lives and breathes sockeye salmon. The Ozernaya River has the largest run of sockeye salmon in Asia and the whole economy of this town revolves around it. Without fish, there is no work, no life.

Located about 140 miles from Petropavlovsk-Kamchatsky, the regional center, Ozernovsky was founded in 1907. Most buildings are dilapidated, dating to the Soviet times of the 1940s to the 1980s. Dirt roads, hardly passable after rain, connect Ozernovsky to the village of Zaporozhie, located on the opposite side of the river. Pictured above is a kindergarten, located in Zaporozhie.

About half dozen companies fish for salmon in the river and along the coast. A number of processing plants process the fish on-site and load finished product on trampers, cargo boats that transport fish, waiting just off shore. Rusted parts of one of such vessels still stick from the intertidal and lay scattered along the coastline. The story goes that about 5 years ago, a 200-foot vessel was anchored offshore when a major soccer game started on TV. The crew decided to move closer to town for better TV reception, but a storm picked up, and by the time they’ve realized they were being pushed on shore by waves and wind, it was too late to save the boat.

The town’s coastline is actually litered with rusted boats and unrecognizable metal parts. Old cards scatter the grasslands around town, giving it a ghost-like appearance.

One day I was exploring the hills south of town. I came across an old cemetery, overgrown with wildflowers. Red stars on metal peaks adored more patriotic graves. The cemetery looked forgotten, as if the people who were supposed to visit it have also died or left town. A little further down the bluff, a non-functioning lighthouse came to view. It piqued my curiosity. Only when I sat down on a bluff did I see a rusted sign with a radiation warning (pictured below). As I later found out, the lighthouse contained batteries with plutonium, or such, that are still scattered around the site. But do not worry, I was told, it’s probably safe if I don’t touch anything.

Point Reyes, an hour drive north from San Francisco, is a gem of a place. A prominent cape in the Marin County […]

It was a gray and rainy day, but it did not deter hundreds of people joining the festivities on the Arcata  Plaza […]