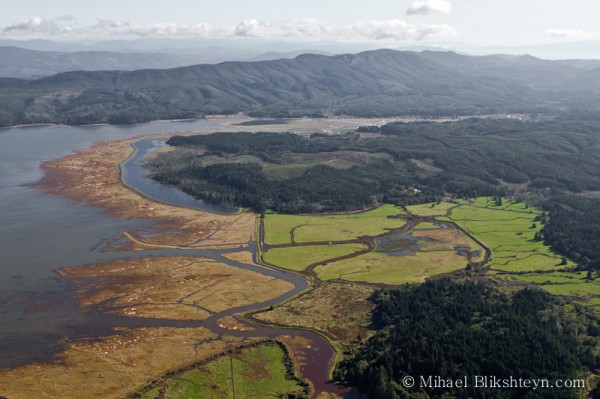 Continued from Olympic Peninsula – an aerial view. Part I.

We were stranded on an abandoned airstrip 20 miles from the nearest town. Even at this remote location we had cell phone reception. Jane, our pilot, called her husband. They had a second plane, a tiny Piper, with a front seat for the pilot and a back seat for two people, with one seat belt to share between the passengers. It was an adorable but slow plane, with an average speed of 40 mph over land. It was going to take 3 or 4 hours before her husband would come here from Portland to pick us up.

The day was sunny and warm, and the three of us had time to explore the area. An abandoned plane support facility, with a plush doll hanging in the middle from a metal hook, had surely seen better days. It was surprising unvandalized, with intact glass windows and no garbage. A wooden one-story NOAA meteorological facility nearby had an older lady solely working there, launching weather ballons, like clockwork, every 12 hours.

The little Piper came to our rescue around 6 pm, just as the sun was touching the horizon. As all four of us couldn’t fit in it, Jane found a hotel in the nearest town that agreed to send out a car to pick her up for the night. Her husband would return the next day to get her. The Piper had glass windows from floor to ceiling on both sides, making for a spectacular view, but no heat. The bit of warm air coming from the engine into the cockpit didn’t reach past the pilot, and we weren’t dressed for cold weather, expecting to be back in Portland by late afternoon. Flying several miles high with the sun down and no heat, we were very cold the whole way back. We didn’t make it back until around 11 pm, but still happy not to spend the night under the wing of the broken down plane on the abandoned airplane.

Several months ago I met the priest of St. Nicholas Russian Orthodox Church. The Church and Rectory in Juneau, Alaska are “among […]

Four years ago, I was visiting my family in NYC. At the last minute, a friend and I decided to take a […]