OK, so it’s actually the Pacific Northeast, from the Pacific point of view, you know, but I’ll leave that for another discourse. 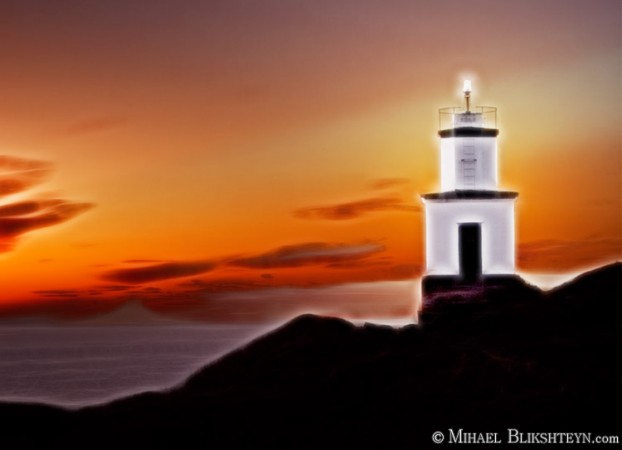 There is something about lighthouses and waterfalls that stand out as destinations for so many people. Personally, waterfalls have never been a draw for me. I would rather have a trail end at a tree – or a so much more useful tree stump – for lunches and resting, or even a non-discreet destination – than a waterfall. But then again, I haven’t tried climbing them in the winter, when they’re frozen.

On the other hand, lighthouses have a magnetic effect on me, and not just because pictures of them sell like pancakes. Or the Israeli pickles. No, it’s the sea rat in me. These messengers between tiny fishing and merchant boats on the high seas and quaint and quite harbors make me reminisce about my days on the water: on fishing vessels in the Bering Sea in the winter. On a rumbling bright-orange U.S. Coast Guard icebreaker Healy north of St. Lawrence Island. The trips on my beloved Alaska Department of Fish and Game Research Vessel Pandalus in the Gulf of Alaska. The surreal night fishing trips on wooden dingies in Lake Tanganyika in East Africa. My very first research cruise on NOAA vessel Ferrell to the Gulf Stream in the Atlantic. Hot days spent on skiffs on the Illinois River setting traps and surveying fish while trying to avoid flying Asian carp. Or, on a wooden chartered boat full of dedicated researchers scrubbing and measuring the intertidal life on the major islands of Prince William Sound – an unforgettable experience. Or, … but I better stop myself.

So, when I ended up on San Juan Island in Washington, I knew I had to visit the two lighthouses there. The Cattle Point Lighthouse, above, sits on a desolate bluff on the southeastern part of the island. No being very photogenic, I made a point to hike to it with a flashlight before sunrise, in hope of getting an interesting photo with the rising sun. With almost no clouds, the sunrise wasn’t particularly captivating, so I added my own mood to the photo digitally, if you will.

The Lime Kiln Lighthouse, above, the much more visited lighthouse on the west side of the island is more photogenic but too crowded for my tastes. The first time Chelsea and I were looking for it, we had only several minutes left before the sun set, as we managed to miss all the road signs pointing to it. In a rush to see it before the sun would completely disappear, we ran down a trail without paying attention to any of the signs, assuming that all the trails from the parking lot would lead to the main attraction in the area. Well, they would have, had we headed in the proximate general direction. At least, with the sun set, we also missed the last of the crowds for the day.

While visiting Coose Bay in Oregon, my CouchSurfing host took me to the nearby Umpqua River Lighthouse. With the fog rolling in from the Pacific, it created a fast-moving light-catching blanket around the head of the lighthouse. I was going to add a cacophony of frogs to the background, but now that I think about it, it was January in Oregon. There were most likely no frogs “cacophoning”.

It’s hard to miss these peculiar brown birds gliding, in small groups, above braking waves of the ocean edge, disappearing into the […]

On a recent trip to Ecuador, I spent time exploring communities of the Andes Mountains. Ecuador is a small country in South […]

Long nights, late sunrises, and early sunsets present a wonderful opportunity for little-ambient-light photography. It’s such a pleasure to wait for a […]

Ah, life on the high seas. A small trawler making its way through the open waters of the Gulf of Alaska.