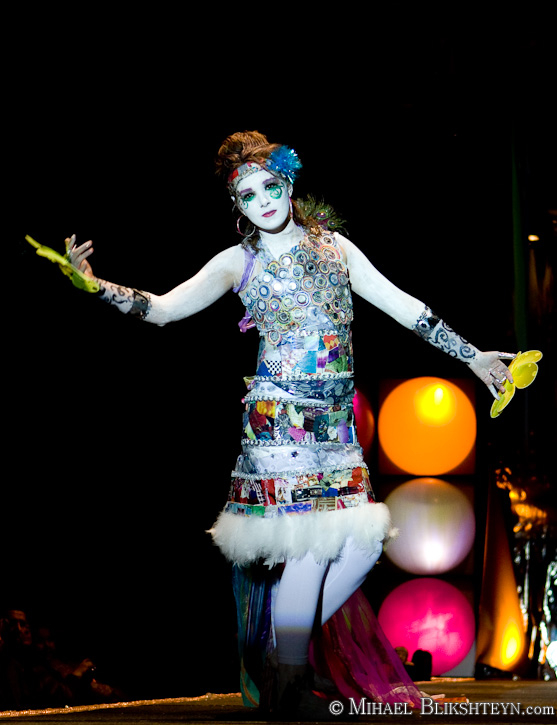 One of the most anticipated events in Juneau, Alaska is the annual Wearable Art Extravaganza. A fashion show of extravagant dresses and costumes made from the most ingenious materials, it pushes the envelope of many of the artists’ creative thinking and abilities. Now in its 8th year, the theme for this year’s show was “Altered State”, a twist on Alaska’s 50th anniversary since becoming a state in the union. Due to its popularity as a fundraiser for an arts scholarship program and for the renovations of the Juneau Arts and Culture Center, the show has also been expanded to two days to accommodate everyone wanting to experience it.

This year’s Wearable Art had 33 entrants,  two from as far as Ketchikan and Homer. The idea for the event in Juneau was borrowed from the popular namesake event in Ketchikan and has taken a solid root since. However, the original wearable art was actually started as a fundraiser for a small art gallery in New Zealand and has since become a large international event there, drawing tens of thousands of visitors each year.

But let’s get back to Juneau. The materials used in this year’s show ranged from porcupine quills, moss, bark, and mahogany to mirrors, salvaged metals, phone books, prescription bottles, Skittles wrappers and shower curtains. People of all ages created wearable art and modeled it. Third place on both Saturday and Sunday was awarded to “Goldeneyespy”. Made of brass, fabric, styrofoam, working light bulbs, and many “hidden” objects that could only be noticed upon close inspection – like little toy birds in a cage or a large golden ant – it was truly a creative masterpiece.

“Pieces of Peace” took second place on Saturday and first place on Sunday. Created out of silk, bark chips, porcupine quills, spruce and pine needles, moss and lykens – it was literally a breathing piece of art. The bark for the dress was sent from countries in South America, Africa, Europe and Asia and most pieces had the word “peace” written on them in many different languages.

Finally, the piece that took first place on Saturday and second place on Sunday was made entirely out of solid and striped mahogany, ceder, and lace wood maple veneers. “Lady of the Wood” was created to resemble an 18th Century dress as closely as the all-wood materials allowed. This piece is heading to New Zealand to compete in the International Wearable Art Extravaganza.

Many other pieces were very imaginative and innovative, and it’s only the lack of space that holds me back from describing them. If you’re convinced it’s an event you don’t want to miss, the dates for next year’s show have already been set – February 13 and 14, 2010!

One thing for sure, there is a bottomless well of very interesting people in Arcata, California. I decided to start documenting many […]

Life on a yacht. Sailing through the Strait of Juan de Fuca between Washington state, USA and Vancouver Island, British Columbia, Canada.