Southeast Alaska’s Inside Passage is dotted with islands, large and small, many only a day of paddling from each other. Some of them are within an easy reach of Juneau, making kayaking a popular activity here. A number of locals have lobbied to get a few of the more popular islands protected from development, and on June 4, 2008, the governor added 14 islands around Juneau to the Channel Islands Marine Park, the state’s system of marine parks.

Although these islands require an effort to get to, they still see their share of junk and trash accumulated along their beaches. Tides, currents, waves and wind deposit remnants of commercial fishing and boating – nylon nets, rope, plastic bottles, plastic bags, plastic containers – whatever floats, along their shorelines. People who flock to these beaches  sometimes leave their trash behind – cans, camping and picnicking leftovers, shotgun shells, tarps. Some trash makes me wonder how it even finds its way to these small islands – airplane tires, tractor engines. 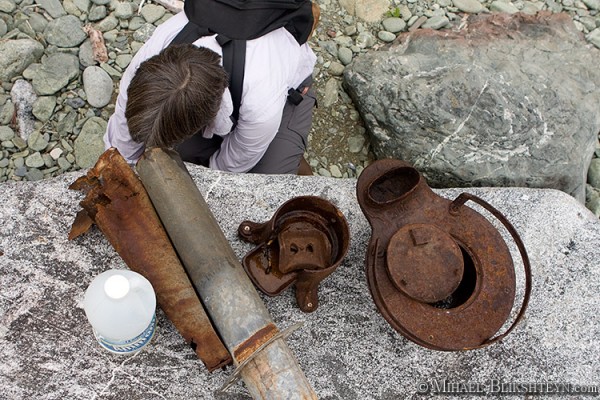 In August, Carol Anderson of Turning The Tides, a Juneau-based non-profit organization whose mission is to raise awareness about ocean issues and to promote ocean-friendly practices, clean-up efforts, waste reduction and sustainability, organized a beach cleanup of several of the nearby islands. About 10 volunteers on two boats spent a beautiful sunny, warm day collecting trash from beaches of Lincoln, North, and Benjamin Islands. 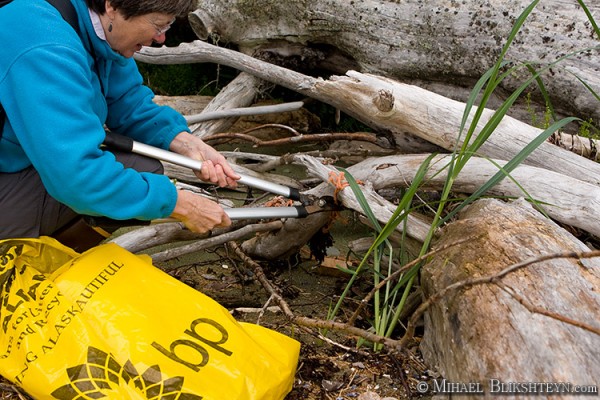 Of course, collecting other people’s trash might be a feel-good effort, but it wasn’t our treasure and is not a solution to littering. Plastics, even though they break down to smaller pieces, will theoretically linger forever, as there is no natural mechanism for them to decompose into basic elements. In the process, some release toxins that mimic or disrupt hormone pathways, among other negative effects, potentially leading to an increased chance of cancer. Avoiding use of disposable plastics – bags, water bottles, containers, forks and spoons – is one part of the solution. Not littering is another.