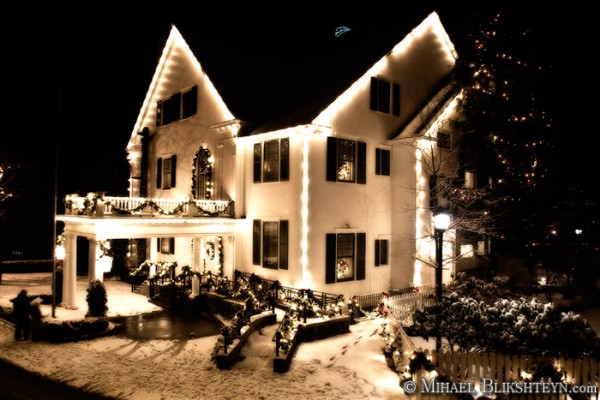 My idea was to write a cheerful story about the Governor’s Mansion since I live only a few minutes from it and often pass it on the way to downtown. How it turned into a post of gloomy night-time shots of desolate downtown and the governor’s mansion, I don’t know. Perhaps, I shouldn’t have looked at my credit card statement before sitting down to pick the photos for this post. But here it goes anyway, with photos completely out of context.

When Frank Murkowski, our previous governor, occupied the mansion, it looked and felt dead. I could hardly see any sign of life. I suppose the mansion was reflective of its inhabitant. Now that Sarah Palin moved in, a younger governor with teenage children, the place came to life. A trampoline magically appeared in the backyard. Two swings were made for her kids, by suspending fishing buoys from a tree. I even see her once in a while playing with her kids in the backyard. A truly unique feature of my favorite city and the state. It’s also refreshing to meet our governor jogging on trails, by herself, without bodyguards. Yes, Juneau is not big (and we like to keep it that way), but the state still is.

The photo of the governor’s mansion was modified in Photoshop. It actually was quite cheerful when I started playing with it, with bright Christmas decorations, and a mother and a kid standing in front of the mansion, reading a placard. But by the time I was done massing with it, it became almost Hitchcockien. Now, the photo of downtown Juneau, with the background lights of houses on the Blueberry hill on Douglas Island, was not modified at all.

I feel like I am cheating posting another photo of a Brown Pelican, especially that my dedicated Brown Pelican posting was only […]

In the film days, photographer’s job was done when he dropped off rolls of film with the client’s publishing department. Now, editing […]

A small but dedicated group has sprung up in Humboldt. They show up on beaches, early in the morning, rakers in hand, […]

Gary Aitchison has been repairing shoes around Tacoma, Washington since he was 15 years old. That’s 45 years of being a cobbler. His […]