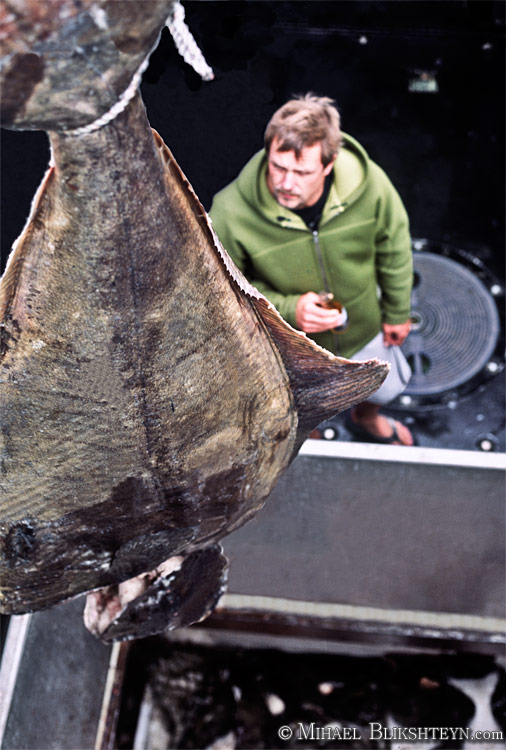 With the halibut and black cod (sablefish) season just opening in Alaska, I decided to post a few photos from my photo archive of the halibut fishery from Dutch Harbor, Alaska from 2005. Halibut can get very large. They are one of the largest bone fishes, not that rarely reaching over 300 pounds. At about 3 to 5 dollars a pound paid to fishermen, such a fish could easily fetch over a thousand dollars. They are commercially fished with a longline – a line stretching up to several miles with baited hooks every foot or so. A buoy is tied to one end of the line, and when the line is set, it floats on the water surface, indicating where the line starts. After soaking for one to several days, the line is retrieved. Once caught, halibut are usually bled right away by having their gills removed. They are put in a fish hold below the main deck and covered with ice, which keeps them fresh for up to several days.

Once delivered, large halibut are offloaded individually by tying a line over their tail peduncle and lifted with a crane. Smaller ones are loaded in brailers (mesh sasks) and brought up from the fish hold in bunches, also with a crane. Several options are available for processing them. They could be packed in large shipping boxes with fresh ice and shipped to markets in the Lower 48, often to Seattle. They are also commonly cleaned, headed and gutted and then sent to fish markets.

And so I found myself in Arcata, on the California North Coast, smack in the midst of Coastal Redwood forests, delicious produce […]

One of the most successful and largest fishing companies in Ozernovsky, Kamchatka has many mouths to feed.  Not even counting their fishermen, […]

I’ve never been on a golf course, so I jumped at a chance to do a photo shoot of a friend playing […]