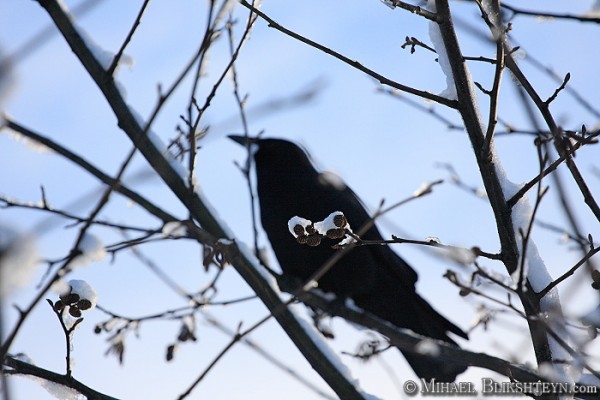 I’ve been asked to photograph ravens for a client who wants to market those prints to tourists this summer. I thought: “well, what could be easier”? There are several spots in Juneau where I see them consistently. They come close when food is in sight, and often end up in comical situations, begging to be photographed.  So I got my longest telephoto lens out, which is a 112 – 220 mm (35-mm equivalent). Not necessarily a long telephoto, but given how close they approach people, I figured that should be more than enough. 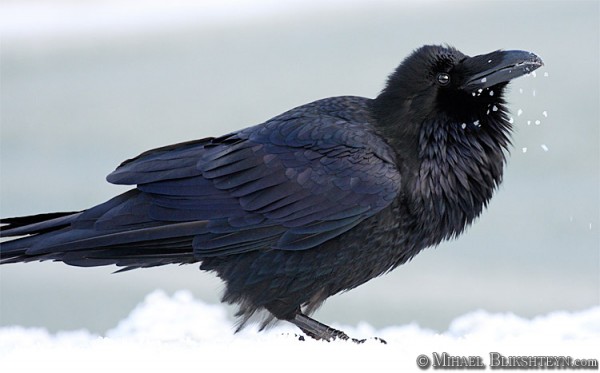 The sun was lazily rising up, trying to break though a grey cloud cover. I got to one of their hang-out locations where a number of younger ravens were making a commotion on the ground. Perfect! Standing across the street, I pulled out my camera. As if a gun went off, the ravens scattered in an instance. Some flew up into tree branches and on building roofs, just far enough to become black dots in the viewfinder. I patiently waited for them to resume their business, remaining motionless as far as the chilly weather allowed, but to no avail. The birds curiously looked down on me, from the heights of their perches, vocalizing and changing positions, but remaining unreachable by my lens.

After an hour of trying, I went for a cup of mocha and a muffin at the Valentine’s cafe. Their cranberry muffins looked especially good, so I bought a second one in case the ravens would share my taste in pastries. For $2.50 a muffin, one muffin was all they were getting. When I threw pieces of it on the ground, a black cloud of ravens descended  at once. It worked! I was about to raise my camera, when the black cloud was overcome and displaced by a molted-white cloud of gulls. The gulls swallowed every single piece of the muffin at once, and proceeded to leave me without a doubt that they wanted more. They were very demanding, following me at an arms-reach, like a flock of ducklets. The ravens flew back to their perches and silently watched from above.

The next day, I went to a local supermarket and bought several one-dollar muffins. The gulls weren’t there, so I threw pieces of muffins on the ground. A couple of ravens made a low-flying pass over the muffins but decided against landing. The rest of them remained motionless on trees and roofs. Apparently, a generic breed of muffins from a local grocery store was not up to their standard. Only when I hid around the corner of a building did they land for a tasting, and at my first appearance quickly scattered, refusing to land again, no matter how far I walked away. I was against a worthy opponent!

It’s been several weeks and many a number of tries to get interesting, captivating photos of the raven. I am slowly figuring out how to get their photos with my shorter telephoto, but for one, I have just received a new telephoto lens – 160 to 640mm (35-mm equivalent). That should certainly help me get shots of the older birds, who are too cautious to come close. And I’ve learned a few tricks that help me get the shot I want – it seems, for the most part, being mostly about hiding my camera while taking photos. 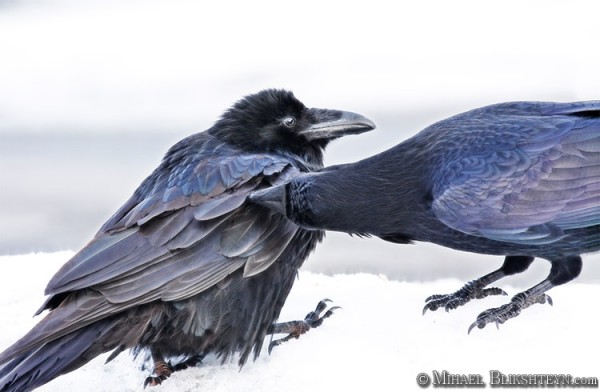 For more photos of ravens, see the Photo Archive .

2 thoughts on “The Raven”