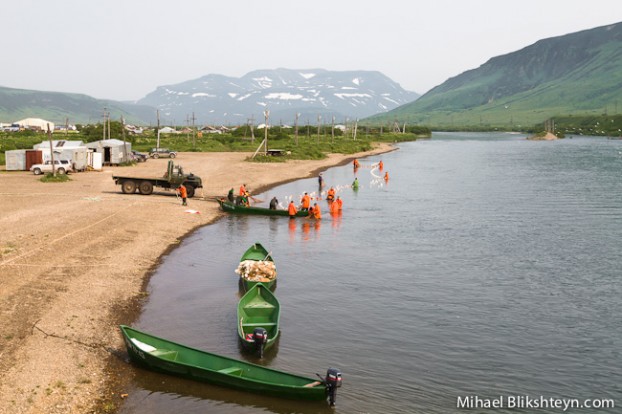 Unlike the salmon fisheries in the Untied States, Russian commercial fishermen catch a substantial proportion of salmon in rivers. On Kamchatka Peninsula in the Russian Far East, the regional government has recently leased fishing parcels, both coastal and in-river, to Russian fishing companies for 20 years. One of the goals for the long-term leases was to incentivize local fishermen to maintain healthy, sustainable salmon populations. Another reason was to encourage fishing companies to invest in the fishing and fish-processing technologies.

Fishing companies received fishing parcel allocations based on their prior catches. Some fisheries had seen fierce battles for parcels closest to river mouths. The closer a parcel is to the river mouth, the more fish fishermen are likely to catch. In Russia, this new system was dubbed the “Olympic System”.

The Ozernaya River, which supports a remarkable sockeye salmon fishery, rivaling that of Bristol Bay, Alaska, has half a dozen in-river parcels. The most productive parcels, closest to the river mouth, have seasonal crews of fishermen stationed there for the duration of a fishing season. Each crew consists of 10 to 15 male fishermen and one or two female cooks, living in trailers or huts at the parcel. Visiting various salmon fisheries on Sakhalin and Kamchatka, I have noticed that fishermen are always men and cooks are always women.

Fishing is done with a beach seine. A beach seine set starts with one end of the net held by a couple of fishermen at the upstream end of the parcel, demarcated by a boundary marker. The rest of the ~200-m long net is deployed from a skiff. Fishing regulations prohibit blocking more than 2/3 of the river channel by the net during beach seine operations.

The fish are left  in the river for half an hour to die. A tractor with a brailer, a small net attached to its arm, scoops up the fish into a truck for delivery to the processing plant. See next week’s posting for photos of a Russian salmon processing plant.

For more photos of this and other fisheries, please see the Photo Archive.

I feel like I am cheating posting another photo of a Brown Pelican, especially that my dedicated Brown Pelican posting was only […]

Two years ago, just before I took a hiatus from Alaska, I took a series of photos of the Gold Town Nickelodeon. […]